So autumn has rolled in, bringing with it the cool mists and glowing leaves we associate with this time of year. Drizzling rains and some early frost bring with them dangers, though, which is why it’s a great time to discuss fall protection. No, not protection for this chilly season; we’re talking protection against falling from heights, the leading cause of deaths on construction jobs.

Falls: A Clear and Present Danger

People who work in roofing, construction, ironworking or other jobs where working at height is routine are less likely to fear falls than those who work squarely on the ground. However, a comfort with heights does not and should not translate to automatic safety. 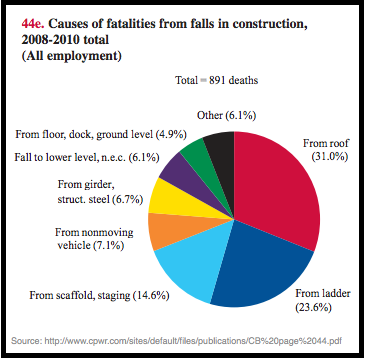 According to the Occupational Health and Safety Administration, falls accounted for the majority of construction-related deaths in 2014, clocking in at a whopping 39.9 percent of all fatalities. Considering that the next most common cause of fatality was electrocution at 8.2 percent (followed by being struck by an object at 8.1 percent and being caught or crushed at 4.3 percent), falls clearly represent a serious risk for workers.

The Importance of Fall Prevention

Making matters worse is the fact that fall prevention is not taken seriously enough by many companies. Even those that do take it seriously often fail to put adequate measures in place. In fact, from September 2014 to September 2015, the most commonly cited OSHA violation in construction was fall protection, according to the same source.

This is an especial concern for small businesses. According to 2008-2010 statistics, falls are significantly more likely in smaller companies. Falls at companies employing between one and 10 individuals accounted for 54.7 percent of fall-related deaths, while numbers ranged between 8.8 and 15.9 percent at larger organizations. The likely conclusion is that smaller businesses do not have the institutionalized framework to prevent falls as effectively.

No matter what size business you run, it’s important to put that framework in place. Especially as we slide into the slippery autumn months, making roofs slick and reducing traction on scaffolding and other structures, it’s even more important to ensure workers are as safe as possible.

According to OSHA guidelines, workers are required to use fall protection when exposed to a drop of 6 feet or more. The main fall preventions techniques are as follows:

This relatively simple system consists of a harness the worker wears, an anchor (A) attached to a secure point on the building or structure, and a line (C) that runs between them. The harness (B) must fit over the shoulder blades and involve leg straps, as simple belts can cause severe injury in the fall.

A fall restraint system is closely related to a fall arrest system, except that it does not let the worker reach the edge of the roof or other surface. In essence, the line is short enough to prevent the worker from even getting to a point of being able to fall, but in order to work effectively, must support a significant amount of weight to prevent the restraint from breaking while on the job.

This is exactly what it sounds like: a guardrail that is set up along the perimeter of the roof as well as around any openings in the roof (skylights, atriums, lower levels) to ensure that workers do not fall through. Guardrail heights are mandated by OSHA.

So autumn is here. Let this be your friendly reminder to get your fall prevention system in place now, before it’s too late.