Everything You Need to Know About Blue Roofs 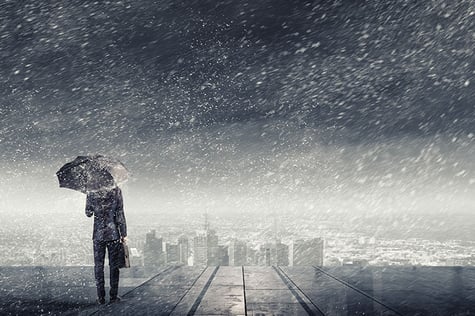 We’ve written quite a bit about green roofs and how adding a layer of vegetation can impact both the urban environment and a building’s energy efficiency. The latest industry trend, however, is blue roofing. And it’s all about storm water management.

What is a blue roof?

On a blue roof, a system of detention ponds collects storm water, temporarily stores it, and then releases it slowly when the rain has stopped. It acts as a temporary sponge, mimicking the hydrology of the site before the building was constructed. The water collection can be accomplished through everything from building risers that cause water to dam up in designated areas to installing custom-designed trays for collecting and releasing water.

What are the benefits?

In urban areas with a combined sewer system – meaning that there’s a single sewer system to handle both sewage and storm water – rain can quickly overwhelm the system, sending untreated sewage (usually referred to as combined system overflow, or CSO) into rivers, streams, and lakes. And it doesn’t take as much rain as you might think – New York City, for example, can experience problems after as little as one half-inch of rain. Blue roofs help mitigate that risk.

Another benefit is that, when combined with light-colored roofing materials, a blue roof can significantly reduce a building’s cooling costs. In addition, some systems spray the stored water back on the roof in a controlled fashion, providing even more cooling. Some buildings can also utilize the stored water in landscaping or in areas where green roofing is being used. Others use the collected water for recreational purpose, such as cooling a roof’s walkways or providing water for fountains.

What else do I need to know?

There are a few things to consider before installing a blue roof on your building:

In most cases, blue roofs are significantly less expensive than green roofs, often coming in at under $1 per square foot.

One inch of water weighs 5.2 pounds per square foot, which can add a significant load to a roof. Have an engineer verify that your building and roof can support the weight of the water being stored.

In addition to the potential for leaks, standing water also attracts mosquitoes, which could increase the risk of diseases like the West Nile and Zika viruses. So, if you do plan on implementing a blue roof, make sure you have taken steps to minimize mosquito breeding.

As with pipe supports and other rooftop equipment, anything that punctures the membrane introduces the possibility of leakage. Non-penetrating detention trays are the best way to avoid that problem.

Some warranties stipulate that any alterations to the roof’s surface voids the warranty. Check your warranty before installing a blue roof (or beginning any other roofing project).

New York City is leading the way in blue roofing technology, and city code stipulates that blue roofs must have a second membrane. Check to see what the codes are where you live.

Sound interesting? Read up on what New York City -- where rooftops account for nearly 20% of the city’s square footage --  is doing to gain some insight as to whether your building would be a good candidate for blue roofing.