How to Identify You Have a Rooftop Supports Emergency 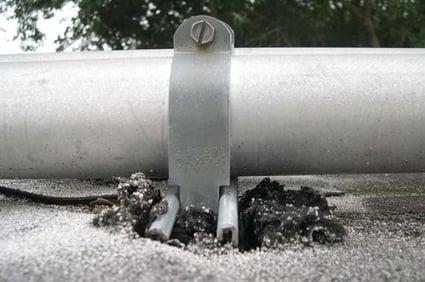 Protecting your roof and your workers means knowing when you need expert help. That requires recognizing both the type of problem you have and the seriousness of the situation, and that can only happen when you’re carrying out regular inspections of your rooftop supports and know what to look for.

Here’s are some signs that you need to enlist the help of a professional:

Properly functioning rooftop supports don’t allow pipes to sag. Visibly sagging pipes indicate a support system failure that has progressed to the point of being a serious problem.

Wall leaks and cracks are often the result of a failing rooftop support system. The inadequate support can let a pipe bend too much, thereby putting more pressure on the pipe than it was designed to bear. That can cause the pipe to crack, resulting in a through-wall leak and possibly even a crack in the wall itself.

3. Standing Water on the Surface of the Roof

Standing water that can’t be explained by recent heavy rainfall should always be considered suggestive of a leak, and prompt close inspection of nearby rooftop support structures.

Cracking or rot in any component of the support structure or its base is an indication of pending failure, as is visible separation of one component from another.

Warping results when a wooden rooftop support is exposed to moisture, and it can seriously impede a support’s ability to do its job.

A sagging roof could be the result of a failing support system improperly distributing the load over the roof.

Wind, water, and snow can damage any component of the roof and any structures on it, including the rooftop support system.

Supports that are tilted or leaning are a strong indication of impending failure. Sometimes this is the result of supports that were improperly fastened to the roof surface to start with. It can also indicate that the supports are bearing more weight than their design capacity.

Failing overhead rooftop supports can deflect and sag, letting the pipes they support sag, too.

If the base of a rooftop support is penetrating the surface of the roof, the support isn’t doing its job -- which is to help distribute the weight of the pipe so that no one section of the roof is unduly stressed.

Makeshift supports indicate either poor initial installation or improperly completed repairs. Look for things like pipes supported with pieces of wood, bricks, cinder blocks, etc. Anything other than an engineered support should be considered an indication of possible damage.

Maintenance workers can unintentionally shift or damage rooftop supports while doing their jobs. Since the support system is engineered to certain design specifications, any change in that design (whether intentional or not) could cause damage of its own. If you see a damaged support, closely inspect the surrounding components to see if any further damage has occurred.

Sometimes rooftop supports made of inappropriate materials can rot or rust. A support knocked out of place by a maintenance worker could be misidentified as trash. Or perhaps a support broke and was never replaced. Regardless of the reason, any missing support should prompt close inspection of the surrounding structures.

Take any damage to your rooftop supports very seriously, as the cost of damage to supports can multiply exponentially when they fail and cause damage to the roof. It also presents a safety hazard for maintenance employees and, in the worst cases, other occupants of the building. Inspect your rooftop regularly, and, if you see any of these warning indicators, call in a roofing expert before your problem turns into an emergency.